A self-guided tour of the Mount Dora History Museum

You have entered the first fire station and jail in Mount Dora built in 1923.  It became the Mount Dora History Museum in 1978.

The display case to your right contains maps and photos from the first trains into Mount Dora.  The Sanford and Lake Eustis railroad stopped in Tavares, Mount Dora, and Sorrento.  This was a significant improvement over taking the steamship from Jacksonville to Eustis and traveling the rest of the way by wagon.

As you round the corner and approach the bay doors, the postal sorter highlights the beginnings of every community.  As settlers came into an area, the post office was the gathering place.  In 1880, Isaac Mabette was the first postmaster.  His wife is credited with naming the town Royellou after Ross Tremain’s three children: Roy, Ella, and Louis.

The community’s name was changed two years later to Mount Dora as it was located 185 feet above sea level adjacent to Lake Dora.  The ballot box is from the first election after incorporation in 1910 when John P. Donnelly became the first mayor.

Donnelly liked to tell the story that the town was named for Dora Drawdy when she housed the first surveyors at the Drawdy cabin on the shore of Lake Beauclair.  Further research shows that the Drawdys are listed on census records in Georgia at the time the first maps were published with the name “Lake Dora.” 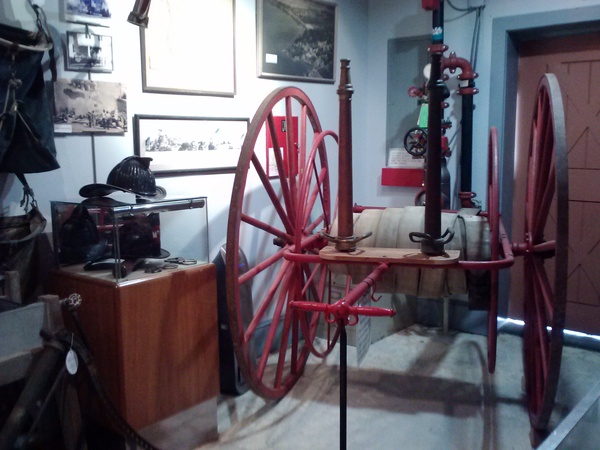 The early 1900s hand-drawn hose cart emphasizes the building’s fire heritage.  A serious fire happened in 1922 and burned the block of Donnelly Avenue from Fourth to Fifth Avenue including town hall.   Rumor says it was started by an electric iron.

The town leaders came together and built the first fire station in 1923.  The town then purchased a 1926 American LaFrance pumper/tanker for the all volunteer fire department.  The building was used as a fire station until 1941.  The police left at the same time but the prisoners remained. 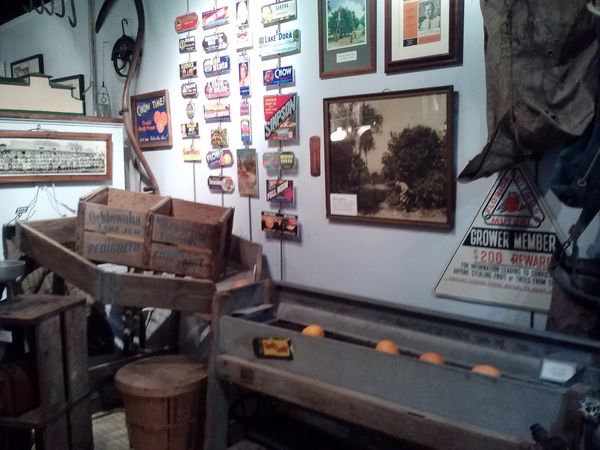 Orange groves became a feature in Mount Dora in the 1870s.  Many families, including the Henrys and Simpsons, came for timber and farmland.  They soon planted citrus trees. Growing citrus required the unique tools and devices displayed in our citrus area.The packing box labels show the variety of growers who shipped out of our region.  Most of the growers gave up on citrus after major freezes. 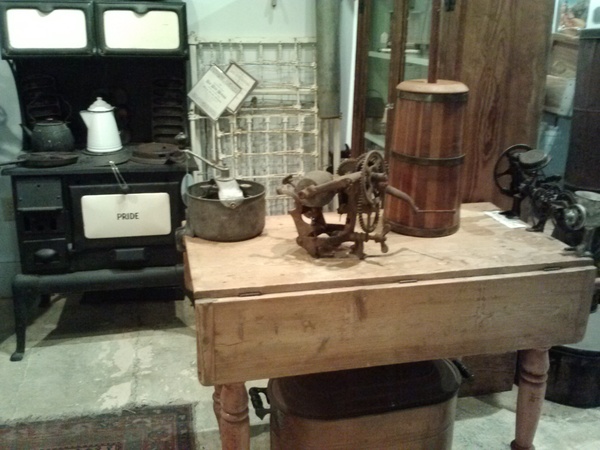 Life was not easy in Florida in the early years.  Our home life display contains a variety of the appliances and kitchen gadgets used in the home. 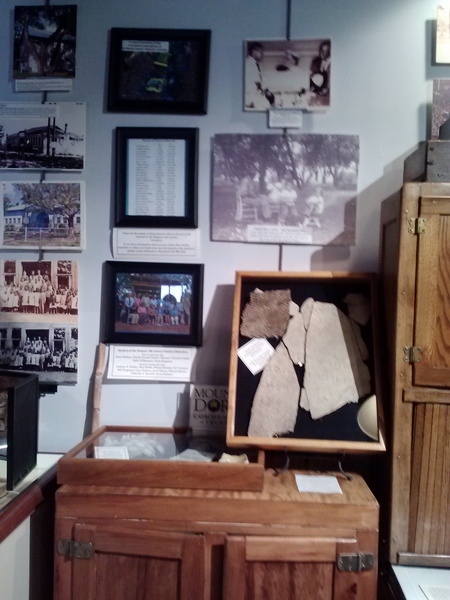 The next section contains photos and gravestones from the restoration of the Mt. Carmel-Simpson cemetery.  The cemetery was begun for the workers of the Simpson family.

Photos are also on display of the early schools and churches.  The school desk is from the Roseborough school.  The Methodist Church was founded in 1881 followed by the Congregational Church in 1883.  The Congregation Church still meets in its original building on the corner of Seventh and Donnelly.  The Bible in the display case belonged to the Donnelly family.

Mount Dora also had a Chautauqua which brought people together for a week of lectures and concerts.  The Chautauqua hall seated over 1000 people before it burned.

As you enter the back room, there is a photo on your right of Mr. White’s delivery wagon.  He began the earliest version of a chamber of commerce.  His promotional piece, “Lakes and Hills” was distributed widely and attracted people to Mount Dora.  Photos also show the development of the marina and the waterfront.

The end of the museum has photos of the railroad depot.  The depot was the gathering point for passengers, freight, and mail.  The original depot is now used by the Chamber of Commerce. 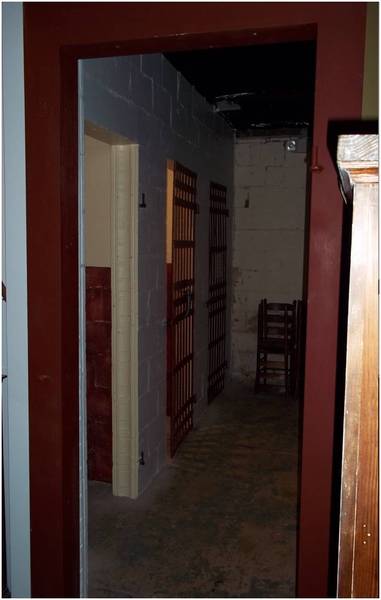 The significant feature in the back of the museum is the restored jail cells.  Shortly after the fire station was built, the back section began its use as the local jail.  It appears that only minor offenders ever came through the jail.

The right hand cell contains original artwork from one of the prisoners.

The middle cell has a painting depicting the only jail break.  An inmate used his boot to knock out the cinder block.  He left a note stating that he had gone home and would return for his trial.

The un-airconditioned jail was not a place anyone wanted to stay for long.   The jail remained in use until 1960 when Mount Dora began taking its prisoners to the county jail in Tavares.

The left hand cell is used to display a private collection of cap guns and air rifles.  It also holds a small still used for creating alcoholic beverages during the Prohibition era.

As you reenter the main room, the display to your right focuses on the early hotels in Mount Dora.  Promoted as the “New England of the South,” many northern visitors would spend several of the winter months in the local hotels.

The Lakeside Inn is the only hotel still in existence that dates from this time period.   It’s most famous visitors were President Calvin and Grace Coolidge who spend a month at the Inn after his service as president.

This section also focuses on John and Annie Donnelly.  Annie McDonald Stone and her husband, William, homesteaded 160 acres in 1875.  When her husband abandoned her in “the wilderness,” the judge granted her the property.

John Philip Donnelly came to Mount Dora in 1879.  He invested heavily in the area and was very involved in the community.  After John and Annie married, he built the Donnelly House, a yellow Victorian house on Donnelly Street across from the park named for his wife. 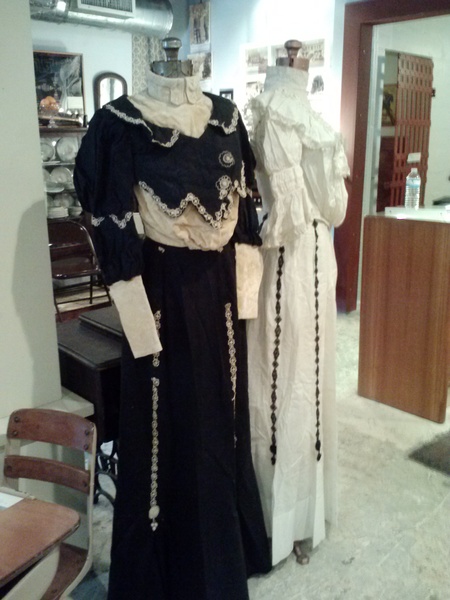 The Sadler family moved to Tangerine, just south of Mount Dora, in the late 1800s and still have descendents in the area today.   The dresses donated by the Sadlers are authentic to the area.

As you move toward the gift shop, you encounter a judge’s desk.  The building was never used as a courthouse.  All trials were held at the town hall.  John Donnelly bought the Guller House in 1929 and sold it to the city for use as city hall.  When the building was rebuilt, the style of the original Guller house was maintained.

The last exhibit focuses on the movie “Honky Tonk Freeway.”  Much of the downtown was painted pink for its filming.  The film crew also taught an elephant to ski on Lake Dora.